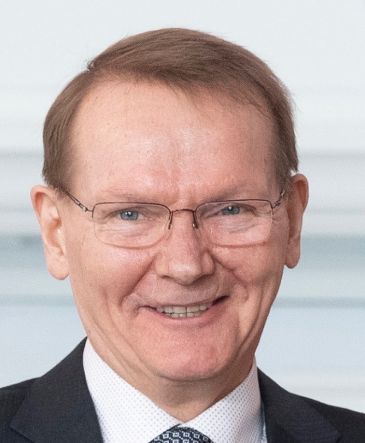 Dr. Pekka Sinervo, BSc, PhD is an experimental particle physicist and a professor of physics at the University of Toronto since 1990. He had a leading role in the discovery of the top quark in 1995 and has subsequently measured many of its properties. He is a member of the ATLAS collaboration at the CERN laboratory in Geneva, Switzerland, which co-discovered the Higgs boson in 2012, and he continues to search for new phenomena at CERN’s Large Hadron Collider. An active researcher, he has authored or co-authored over 1,500 peer-reviewed publications.

Dr. Sinervo has had various leadership roles. Most recently, he was Senior Vice-President, Research of the Canadian Institute for Advanced Research (2009−2015). Previously, he was Dean of the Faculty of Arts and Science and Vice-Provost, First-Entry Programs at the University of Toronto (2003−2008). He has also served as Chair of the Department of Physics (1997−2000), and Vice-Dean in the Faculty of Arts and Science (2000−2003). He has also been involved in governance of national and international research facilities as Chair of the NRC Advisory Committee on TRIUMF (1999−2004), Chair of the Board of Directors of SNOLAB (2009−2015) and Chair of the Computing Resources Scrutiny Group at CERN since 2019.

Dr. Sinervo has served on numerous national and international advisory panels as well as a number of not-for-profit boards of directors. His contributions have been recognized by the Outstanding Teaching Award in the Faculty of Arts and Science at the University of Toronto (1995), the Rutherford Medal for Physics awarded by the Royal Society of Canada (1996), Fellowship in the Royal Society of Canada (1999), Fellowship in the American Physical Society (2003), Senior Fellow of Massey College (2004), Patron of the Canadian Astronomical Society (2008), the Acenberg Award from the Rotman Research Institute (2008), Fellowship in the American Association for the Advancement of Science (2012) and appointment as Member to the Order of Canada (2018).