Canada’s national advanced research computing (ARC) platform has been delivered through the Compute Canada Federation (CCF), which was a partnership of Compute Canada, regional organizations (WestGrid, Compute Ontario, Calcul Québec and ACENET) and institutions across Canada. Providing researchers with access to the infrastructure and expertise they need to accomplish globally competitive, data-driven, transformative research, this national ARC platform serves the needs of more than 19,000 users, including over 5,100 faculty based at Canadian institutions as of January 1, 2022.

Compute Canada (CC) is in its final year of operations. As of April 1, 2022, the Digital Research Alliance of Canada (the Alliance), will take over the coordination and funding activities for Canada’s national ARC platform. CC, its regional and institutional partners, and the Alliance are committed to minimizing the disruption of service to researchers during this period of transition.

The way users access the resources described in this report will remain the same. And, while CC will no longer exist, the members of the Compute Canada Federation (CCF) team will continue to be in place; therefore, users can also expect the same high level of support that they have always received. You may also notice that a number of key resources, such as the Documentation Wiki, will remain branded as Compute Canada. These resources are still valid and will be rebranded over time.

While close to 80% (on average) of the resources available are allocated through the RAC, we reserve a target of 20% for researchers to use through the Rapid Access Service (RAS), which grants all users access to modest quantities of compute, storage, and cloud resources as soon as they have an account. 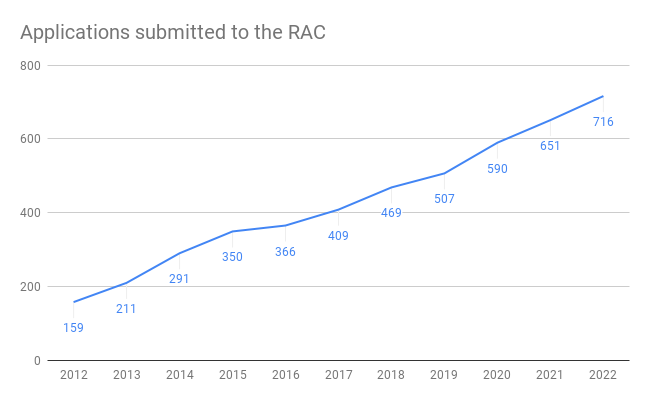 *Note: This report is based on the information available as of February 9, 2022.

Based on available computing resources, RAC 2022 was able to meet 54% of all of the CPU (core year) requested — this is the same allocation rate as last year. Béluga, Cedar, Graham, Narval and Niagara provide 100% of the available capacity or approximately 293,312 cores, of which close to 80% are available for RAC allocations. 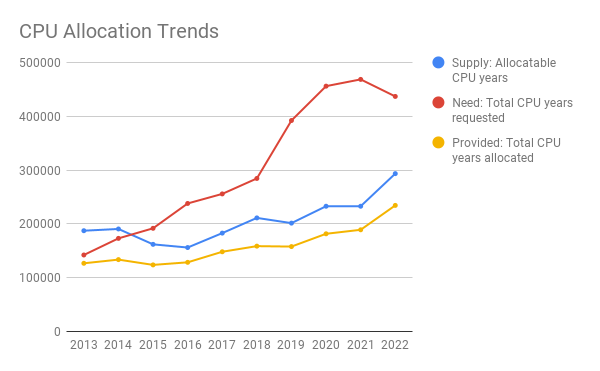 As described above, there were insufficient ARC resources to fully meet the CPU demand through RAC 2022.

As a result, a scaling function was applied to the 2022 competition to provide a means by which decisions on RACallocations, in a context of insufficient capacity, could be made. This function, which is endorsed by the chairs of the review committees, was established so that only applications with a science score of 3.0 or higher (out of 5) received an allocation. Applicants who did not receive a compute allocation can still make opportunistic use of system resources via the Rapid Access Service. The average score of all of the applications submitted to the RAC2022 was 3.7.

CPU requests are scaled based on the overall score of the application and the size of the request. Details and examples of the scaling function are available here. For further questions, contact allocations@tech.alliancecan.ca.

All researchers and their sponsored users with an active account can, as described above, automatically make opportunistic use of CPU and GPU resources on any system. (This ability to compute without an allocation is also referred to as the Rapid Access Service). There is no guarantee on how much CPU or GPU can be consumed by non-RAC holders, as their use of the systems is purely opportunistic.

The RAC application process requires a minimum ask amount for compute resources (currently set at 50 core-years for CPU and 10 GPU-years for GPUs). These minimum values are set in part to control the number of applications requiring peer-review. As the number of applications increases every year, the workload of the expert review committees increases proportionally. Therefore, a RAC award made at the minimum level will ensure higher job priorities than for any non-RAC awardee.

For example, opportunistic jobs with short time limits that request a few cores on a general purpose (GP) system will generally run much sooner than those requesting dozens of cores.

Please read this useful documentation about allocation scheduling priorities and job scheduling policies or contact support@tech.alliancecan.ca for advice on how to maximize usage for a non-RAC awardee.

The demand for GPU resources continues to be more competitive than for CPU resources. As Tables 4 and 5 show, requests for GPUs have increased more than 3 fold in the last 5 years. The allocation rate in 2022 was 24%.

GPU allocations are determined by the following factors: the overall score of the RAC application, the technical justification provided, evidence of previous GPU utilization, the research area of application for which GPUs are requested (e.g., Artificial Intelligence, machine learning, etc.), and the size of the research group. 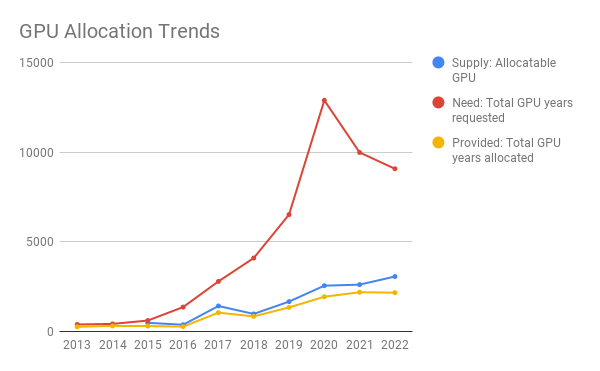 The Arbutus cluster at the University of Victoria has 41,920 allocatable vCPUs (virtual CPUs). These are available via RAC and RAS and are also utilized for internal services such as software development and hosting. Relatively small cloud offerings are also implemented on Cedar, Graham and Béluga. For RAC 2022, the request for vCPUs overall increased by 14%: a 14% increase in compute vCPUs and a 21% increase in persistent vCPUs.

Overprovisioning of persistent vCPUs at a 10:1 ratio has allowed a significant expansion in persistent allocations in the previous few years. Demand for real cores has continued to keep pace with hardware expansions with utilization numbers well over 80%, a threshold beyond which it becomes more difficult to schedule larger compute instances.

Between Arbutus and the additional nodes on Cedar, Graham, and Béluga, this year’s RAC was able to allocate 79% of the total virtual CPUs requested. 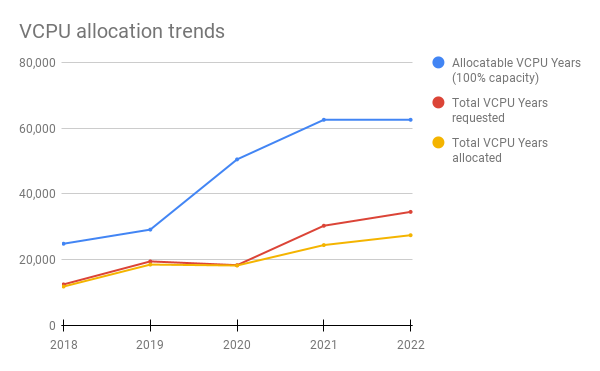 Storage integrated with Arbutus, Béluga, Cedar, Graham, Narval and Niagara provided approximately 181 PB of storage capacity for 2022. This meant that, across all types of storage, a total of 94% of available storage capacity was allocated.

Compute Canada established the annual Resource Allocation Competition (RAC) in response to the Canada Foundation for Innovation’s (CFI) requirement to award advanced research computing (ARC) resources based on the scientific merits of the research proposed. In addition to this requirement, we must evaluate the technical merits of allocation requests.

The overall process is overseen by the Resource Access Program Administrative Committee, which includes representatives from each region and national system host sites.

RAC is guided by the following principles:

The technical review is conducted by technical experts who:

Technical reviewers are required to sign a Non-Disclosure Agreement prior to accessing any RAC application.

New applications submitted to the RAC are peer-reviewed and scored. Scientific reviewers are required to sign a Non-Disclosure Agreement and accept the Conflict of Interest Policy prior to accessing any RAC application.

The final RAC score is based on the following:

Applications are reviewed in one of the committees below:

Monetary Value of the 2022 Allocations

These values represent an average across the national ARC platform’s facilities and include total capital and operational costs incurred to deliver the resources and associated services. These are not commercial or market values. For the 2022 competition, the value of the resources allocated was calculated using the following rates: